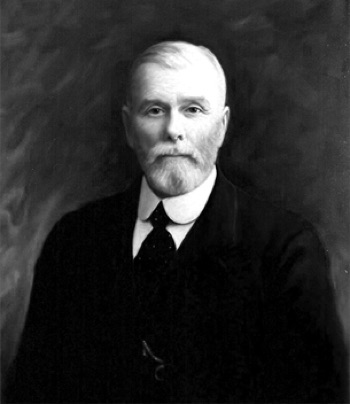 Henry Boot, a son of Charles Boot who was a farmer in the now densely populated Heeley district of Sheffield, was 35 years of age when he founded the business which was to become Henry Boot PLC as we know it today.

Following a seven year joinery apprenticeship, Henry gained over 20 years practical experience with large local building firms before launching out on his own in 1886. Progress from initial jobbing work was rapid and he soon successfully moved into larger scale public works and housing projects. The Company continued to flourish as his son Charles became more involved and Henry retained an active interest until his death in 1931. 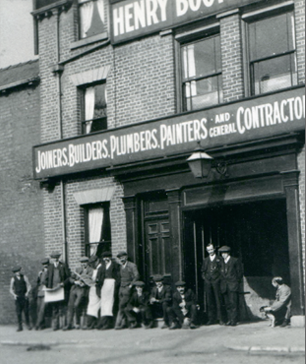 The firm was incorporated in 1919 shortly after which time Charles, the eldest of Henry’s three sons, took over the running of the Company from his father. Upon his death in 1945, Charles was succeeded by his brother Edward. His nephew, Henry M Boot, assumed control upon Edward’s death in 1953 and retired in 1968 at which time his cousin Hamer Boot became Chairman and Managing Director.

Upon the retirement of Hamer as Managing Director in 1986 he was succeeded by his elder son Jamie whose second cousin David H Boot became Non-executive Chairman from 1987 until 1996 when John Reis, grandson of Charles, assumed the position. John relinquished the role in 2011 and was succeeded by John Brown.John Brown retired as Chairman in 2015 and Jamie Boot, the great grandson of our founder and Group Managing Director since 1986, was appointed Chairman in 2016.

Image above: The earliest known photograph of the firm’s original offices and works on Moore Street, Sheffield at the turn of the 20th century. 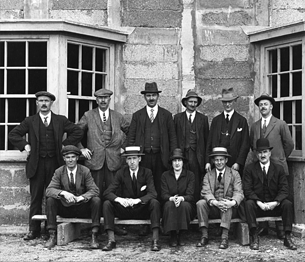 Charles Boot, the eldest of Henry’s three sons, became a partner in the business at an early age and on the outbreak of the 1914–1918 War headed the Company’s efforts in obtaining a variety of Government contracts. Notable examples included the major phase of the Army Camp at Catterick in Yorkshire, Manston Aerodrome near Ramsgate (value £225,000), the Calshot Seaplane Base (value £337,000), the Tees Naval Base, an American Army Rest Camp and Hospital at Southampton and Chepstow Military Hospital.

Many other similar projects were carried out, all demanding speedy and economical construction under difficult war-time conditions.

In one year alone during the Great War, 1,000 military buildings and over 50 miles of roads and sewers were completed. The Company also operated specialised plant including a multi-bucket excavator for the extraction of coprolite for the munitions industry.

It is interesting to reflect that after starting with one handcart and later on one horse-drawn cart, transport facilities had increased to 20 horses and carts and half a dozen mechanically propelled lorries by 1914. Records show that more modern replacements were made as the horses were ‘retired to grass’. For example, old documents show that in 1920 a new large Opel truck was purchased at a cost of no less than £850.

Image above: The way they were: Edward Boot (top row, far right), third son of Henry Boot, along with immaculately dressed site colleagues, in front of a pair of concrete pillar and pier houses pioneered by the Company in the 1920s. We like the improvised bench they are sitting on!

A company office was set up in Paris immediately after the war and, in conjunction with the French Government, administered contracts for the reconstruction of war-ravaged towns and villages.

Within two years of becoming a public company in 1920, the Company was operating not only from Sheffield, London and Paris but from Barcelona and Athens, undertaking the construction of harbours, underground railways, waterworks and drainage systems throughout Europe.

In fact, the Athens office dealt with one of the biggest contracts of the time - a 10,000,000 (1927 value) project comprising land reclamation and protection, together with irrigation works and the construction of roads and bridges. The contract was completed in 1952, work having been suspended only when Greece suffered foreign occupation during the 1939-45 War.

During the 1919-1939 inter-war period, Henry Boot built in excess of 80,000 homes, significantly more than any other contractor in the UK. Of these some 50,000 were built for local authorities, over 9,000 for rent (through Henry Boot subsidiary companies First National Housing Trust Limited and Henry Boot Estates Limited) and the balance for sale to the private sector.

Also at this time the Company carried out an extensive programme of commercial and industrial building, including roads, schools, hospitals, etc.

In 1932 the Company moved to its present headquarters at Banner Cross Hall in Sheffield and its London office was moved from premises in Victoria Street to 10 The Boltons, SW10 (vacated in 1985).

In this period Henry Boot built tens of thousands of homes accross the United Kingdom.

Above image: This aerial photograph of Perry Barr in Birmingham shows the scale of one of our typical housing developments. 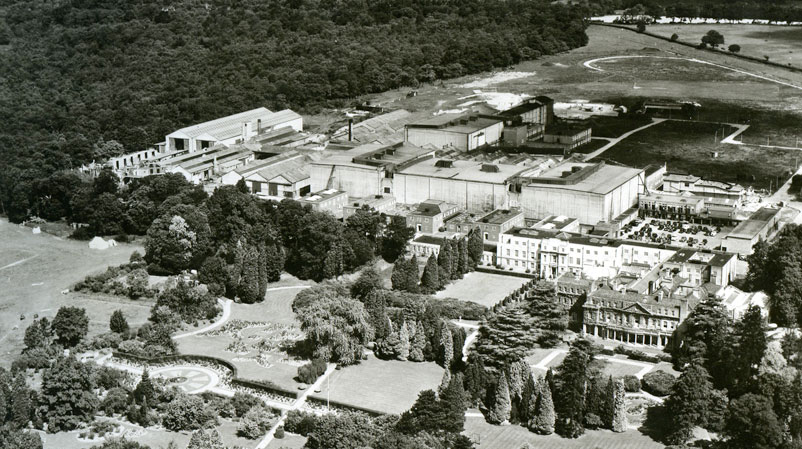 Pinewood Studios at Heatherden Hall, Iver, Buckinghamshire, was designed and constructed by Charles Boot as a Henry Boot development during 1936. Based on the best US film studio practice and layout, the considerable work, including in-house design, was completed within a period of only twelve months.

The studios were eventually acquired by the Rank Organisation and Charles Boot’s son-in-law, Spencer Reis assumed the role of Managing Director, a position he held until his retirement.

Image above:  The early development of Pinewood Studios during 1936, further work continued after the war. 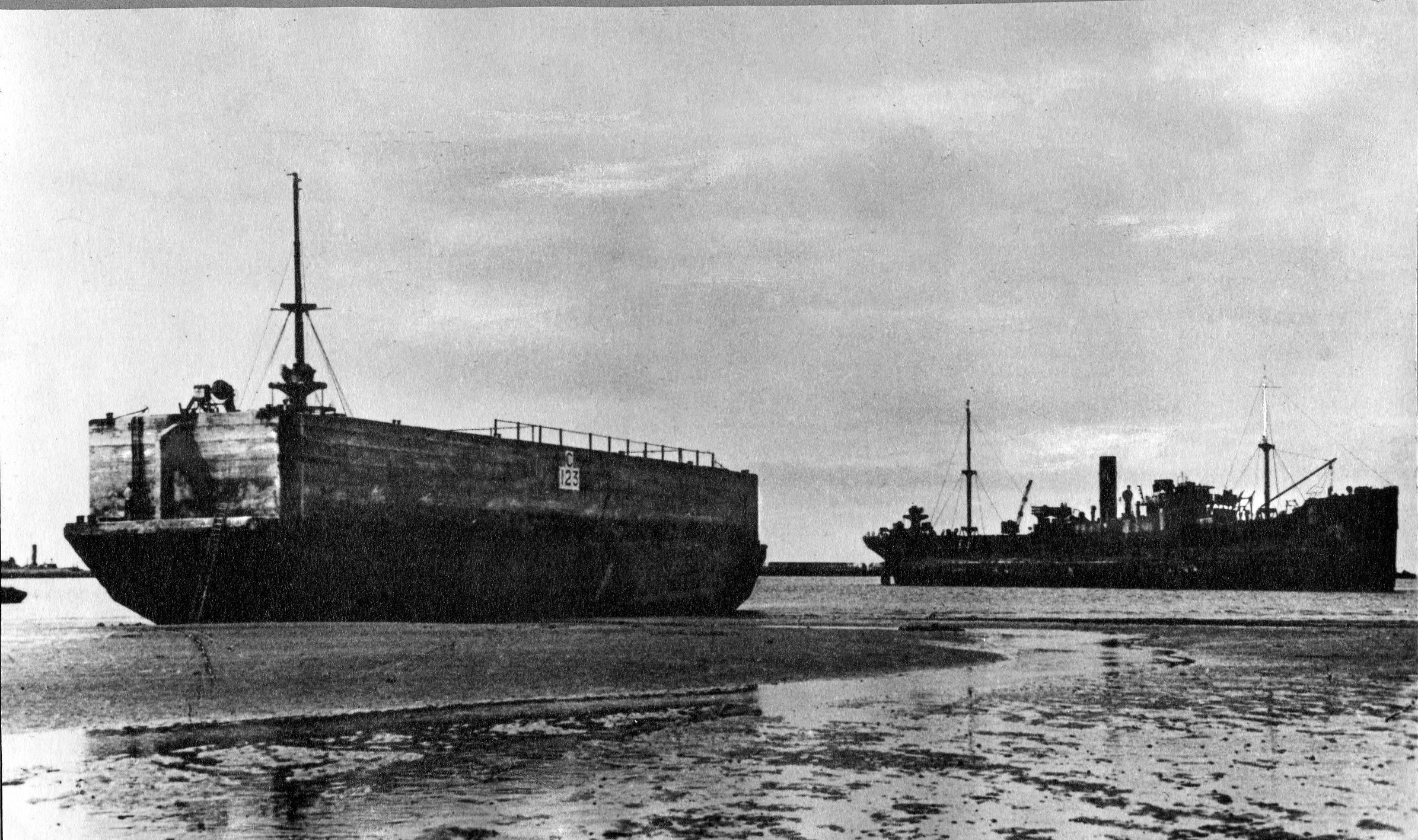 By the acquisition of Baldry, Yerburgh and Hutchinson Limited (founder member of the Federation of Civil Engineering Contractors) vast underground fuel storage tanks and other facilities for the Navy in Lioness and the Shetland Islands were installed prior to and during the Second World War.

Flettons Limited (brickworks) was also acquired in this period and operated for a number of years before being sold to the London Brick Company.

The Company continued to undertake all types of construction work, large and small, both for the public and private sector. These are too numerous and varied to mention, but include the beginning of Welwyn Garden City and the acquisition and near successful development of the Benny Railplane for rapid urban transportation.

1939 saw the commencement of a further spate of work for the Navy, Army and Air Force, including aerodromes, ordnance factory buildings and hospital camps (including what is now Haven Holidays Pwllheli) all of which were contracts where time was of the essence.

Henry Boot also played a part, together with the country’s other major top 20 contractors, in the monumental construction of the Mulberry and Gooseberry Harbours for use in the invasion of Europe on D-Day, 6 June 1944.

Charles Boot JP died in 1945 and was succeeded by his brother, Edward Boot. Work proceeded at pace and traditional Henry Boot building work was supplemented by the formation of a civil engineering company.

Henry Matthews Boot (Charles’ son) succeeded Edward Boot upon the latter’s death in 1953 and turnover continued to increase in the areas of building and civil engineering. This included long-term contract work for the National Coal Board and British Steel Corporation, railway engineering contracting, joinery and manufacture and houses for sale.

An innovative step taken in 1965 was the introduction of Banner Building Society, a Henry Boot subsidiary formed to offer mortgages to the general public for such commercial property as housing, guest houses and public houses. This activity continued until 1982 when the business was transferred to the Midshires Building Society (now Birmingham Midshires, part of Halifax Group plc).

Expansion of Group activities continued, part of which was the acquisition of a foundry in Bingley, West Yorkshire in 1974 to support the railway engineering activity. The foundry traded in Bingley until 1980 when it was transferred to existing premises in Leiston, Suffolk from where it operated until its closure in 1983.

1976 saw an increase in overseas work, initially in Hong Kong, where the Company supplied and laid all the trackwork for the Mass Transit Railway System in joint venture with Gammon (Hong Kong). Other extensive international railway and civil engineering work was also carried out, including a £13m railway subcontract on the Kowloon–Canton Railway for Leightons of Australia.

Over the next few years work was also carried out in Nigeria, Jordan, Saudi Arabia, Malaysia and in Singapore where a £120m railway and associated civil engineering contract was undertaken in joint venture with Gammon (Hong Kong) and Singa Developments. 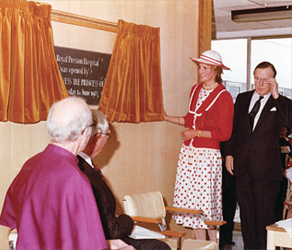 1986 was significant for a series of notable events – it marked the Company’s centenary (100 years of trading through two world wars and six monarchs); Jamie Boot, the son of Hamer Boot, assumed the position of Group Managing Director upon his father’s retirement; and the Rothervale Joinery company was sold after almost 60 years in the Henry Boot Group.

David Boot took on the mantle of Non-executive Chairman in the following year and it was only a matter of months later in September that Hamer Boot died at the age of 65. He had been a Director of the Company for 38 years and in his 19 years as Chairman had seen its turnover increase eighteen-fold.

Further rationalisation of Group activities was achieved in 1988 with the sale of the railway engineering activity which had been operational since the mid 1950s.

Image above: Princess Diana seemed to define the early 80s. Here, in June 1983, she is opening the new Royal Preston Hospital, at the time just completed by Henry Boot Building Limited. 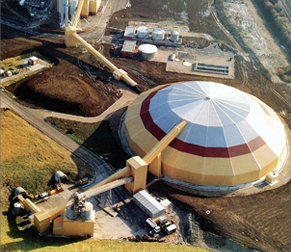 In late 2002 the first of a number of company disposals took place as the Group looked to specialise on a more focused range of activities. By June 2003, the Group had tailored its operations to concentrate on land, property, construction and plant hire, and was able to devote its resources to even greater effect in these core activities.

Image above: Almost looking like something that has fallen to Earth from the Starship Enterprise, the British Gypsum Plant at Barrow upon Soar with its 'circular homogenised treatment unit' was another contract in the early 90s and illustrates the diversity of work that has continued to be undertaken in our distinguished history.

Today Henry Boot is a fully listed company on the London Stock Exchange with a sound reputation for reliability and integrity in its specialist markets. The Company still retains its family links and Jamie Boot, having relinquished his role as Group Managing Director, was appointed Chairman in 2016.

Tim Roberts was appointed Chief Executive Officer in 2020. Land management and property development continue to make a significant contribution to the Group through their nationwide coverage and success.

The construction business specialises in serving the needs of commerce and industry in the North of England and enjoys an enviable reputation for the quality of its performance. With strategically situated hire centres in the Midlands and North of England, the plant hire activity also meets the increasing requirements of industry and the general public.

It is this flexibility and strength of performance that has kept Henry Boot at the forefront of its markets for over 130 years and which ensures that the Company is well placed to continue its impressive progress.